Saying no to a double mastectomy 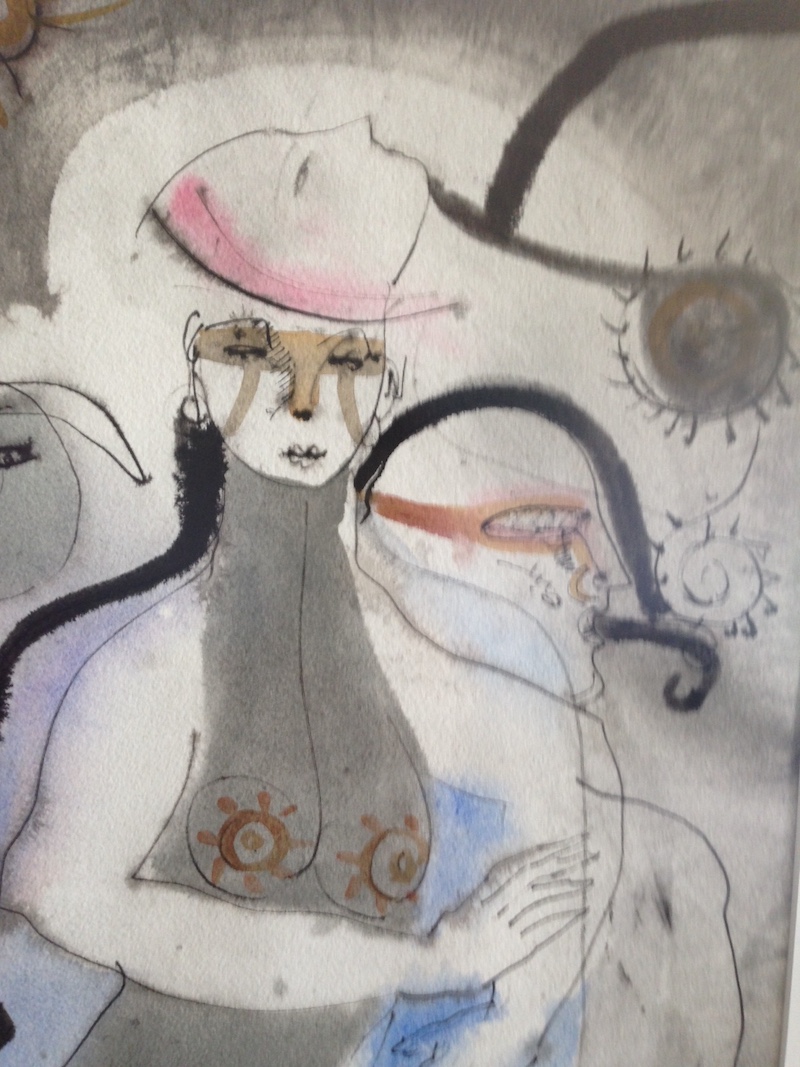 What follows is a story of resilience and of surviving breast cancer through natural and non-invasive procedures.

I am not advising anyone to do what I did, nor am I suggesting that the approach I took is intended to diagnose, treat, cure or prevent cancer or any other disease.

The natural and non-invasive treatments I chose worked for me, but won’t necessarily work for everyone.

THE anaesthetic wears off and I awake in a hospital bed, in a room where sky-blue curtains form makeshift walls and airy spaces. I hear breathing and confused mumblings from nameless bodies hidden by screens. I want to let go, to sink into drowsiness, but Mauro’s voice, and then the surgeon’s, shake me out of my stupor. My husband is asking about me.

“What is it, doctor?”
“We don’t have a diagnosis yet: the sample taken during the biopsy could be benign or malignant. It is difficult to say.”
“When will you know?”
“Within three or four days.  Give my office a call.”

I think the doctor has left, but then I hear his voice in the next cubicle, where someone else is in pain like me, waiting like I am in a sky-blue space.

“Mrs. Pearson, I am sorry to have to tell you that the biopsy has confirmed my suspicions. The tumour is cancerous.  We will operate within a couple of days.”

He is speaking directly to her. There must be no husband to soften the blow.  He is brisk, efficient. No sense wasting time.

The patient doesn’t reply, just draws a deep breath. I feel for her, the compassion of one person in pain for another. At the same time I am relieved that it isn’t me. If cancer struck her, maybe it spared me; if she is sick, maybe I will be saved; maybe I won’t have to die. I don’t know her, and her pain isn’t real to me.

Mauro lifts the curtain and comes to me.

“How are you doing?”
“Everything is spinning and I feel really sick. It’s the anaesthetic—if only I could throw up.”

Mom… I murmur like I always do when I’m not feeling well. In the silence of the ward, I hear my own voice like a lullaby rocking me through the pain – Mom… oh, it hurts so much… Mom… help me Mom, please – softer and softer, till my voice becomes a whisper and the whisper the wordless moan of a wounded animal.     The nurse hears my lament and approaches, but I don’t want anyone, just a basin to throw up in. Afterwards I feel better; the nausea had been overwhelming me.  Then incessant waves of pain begin to hit. If I don’t want to take any drugs, I have to find the strength to face the pain.

I have always managed it in the past, but only if I believed fervently. If I began to doubt, then the larva of dread metamorphosed into a raging tiger, and the thin line of pain became a trench gouged into fresh earth. It devoured me, left me stunned.

I do remember one magical day, though. The dentist was trying to pull a tooth that had crumbled under his instruments. Repeated injections of anaesthetics had done nothing and both of us were exhausted. Unable to suffer another minute, I clutched at a last resort: visualisation. I imagined a sun-bathed meadow filled with yellow poppies. The yellow, soft and brilliant, flowed through my body and took hold of my mind. Light displaced all pain, all fear. I saw the dentist struggling to extract the tooth, and I told my mind to let go, to surrender. The root came away without protest.

If I could only understand how the human mind works, if I could believe that it’s always that straightforward; if I could only direct an obedient brain whenever and wherever I wish.

My right breast is on fire.  I know it has been cut open; I don’t know how deeply or where.  I want to massage it to stop the burning, but they have covered it with bandages.

“Does it hurt a lot?”  Mauro asks.
“A bit…  I feel like I have to throw up again.  I asked them not to give me a general anaesthetic – I didn’t want to go through this afterwards!  Please, just give me the basin then go.”

The nurse returns with sedatives and something for the nausea.  I barely have the strength to wave the pills away. When I’m throwing up, I don’t want anyone around; I don’t want them to turn away in disgust at the rottenness within me.

Afterwards is a feeling of release; I’m delicate like a leaf in the wind, still attached to the branch, still alive. In that dizzy elation after the nausea, all of life seems good, and even the pain in my breast is of minor importance, just a soft and timid murmuring in the background, a voiceless complaint.

I sit up, then stand. Mauro helps me since I can’t move my right arm. Still dizzy, all I want is to get out of here and go home to the kids and both grandmothers, who arrived just days ago from Italy.

I take a step into the evening – the air is cold, sparkling. It’s so good to be alive! I had forgotten. Everything looks new, as if dressed up just for me. Even the lights of the pharmacy across the street, blinking on and off, seem to send me secret messages. Filled with gratitude, I look around as if I have been dropped into an entirely new world. How sad that I feel this only when life turns tragic!

It was only this morning that we arrived at the hospital, and it seems like days ago.  I remember listening to our footsteps echoing in the hush of a city still asleep, the air crystal-clear, the snowy streets pink with dawn.  Passing the silent houses, stepping beneath white-capped branches, my body was so real, so precious.  That was an illusion. If there was no spectre – cancer – how wonderful my life would be, yet this same weary, hard, tedious life only becomes desirable in the midst of this drama.

At that early morning hour, the waiting room was terribly empty.  I sat awkwardly, afraid to disturb the silence. Mauro was next to me, and we were both lost in the ticking minutes, not speaking, not feeling. As if we could keep the cancer at bay by shutting off our feelings.

They called me to the desk to sign a form that I read in disconnected bits and pieces, then had to re-read so as not to make a mistake.  I thought of the women who, waking up after the biopsy, found themselves without a breast because the surgeon, certain it was cancer, decided on an immediate mastectomy.  No!  Trembling with rebellion, set on being the decision-maker for my little life, I added on the form, in quavering handwriting, that I was giving the doctors permission only to perform the biopsy and nothing else, no matter their opinion.

The wait resumed.  When it was interrupted by a nurse, I squeezed Mauro’s hand and followed her, relieved not to spend any more time waiting in fear of the unknown.

Alone now, I was like a puzzle piece isolated from the others in the attempt to find the exact blank to fit into.  The nurse had me undress and put on the sky-blue gown that did away with my last bit of identity, turning me into a number and a diagnosis.  At least I still had my name: it hung limply on the plastic bracelet around my wrist.

The radiologist called me in right away.  I’ll never forget that unhappy face frowning in the curtained cubicle (sky-blue again) as he pushed needle after needle into my breast.  One for anaesthetic, then a handful circumscribing the tumour so it would be clear in the picture, so the surgeon would see it right away.  Pain seared my breast.  To the radiologist, it was a shapeless mass held in his hand – nothing alive, not connected to a body in pain.

He pulled at it, jabbed it, left me lying there waiting as he rushed to the lab to examine the X-rays, hurried back and began again.  Needle, X-ray, needles, X-rays, trying to tame a rebellious tumour playing hide-and-go-seek, when he obviously had neither the time nor the desire to play games. Another angry jab, supreme indifference in his hands. I refused to cry out, but failed to swallow the overflowing pain. Tears lay on my cheeks when, exasperated, he let me go.

They were supposed to operate right away but there were delays and I was left to rest in a bright room where a sympathetic nurse opened the door every once in awhile to bring me a magazine or a smile.  I read, I wrote farewells to my children.  The lines were shot through with melancholy and tenderness.  Then I added some thoughts for Mauro.  Words hidden in the pages of a journal, words that maybe no one would ever find.

I tried to meditate. I visualized the anaesthetist finding the vein immediately, the surgeon having nothing negative to report.  If it is true that under anaesthesia the mind remains conscious, that it can recall everything in similar situations – under hypnosis, for example – then that means that whatever happens in the operating room enters the patient’s subconscious and stays there, in a turbid riverbed of fears and inhibitions.  The thought circled through my mind like a refrain.  I wanted to say something to the surgeon so he’d reassure me, but shyness kept me mute.

The last thing I remember is the nurse’s voice telling me to relax as she injects the liquid into my veins, and my farewell to the world. I leave, here I go now, hoping to return.

And then the surgeon’s words as I woke, the fiery pain in my body, the quicksand of nausea.

I relive the events of the day as I walk home from the hospital.  The pain in my breast is bearable now.  I try to smile when the door bursts open and the children run toward us.  It feels like I haven’t hugged them since forever, like I’m a visitor from another era, like I’ve returned from a trip back in time.

Even though I pretend otherwise, I am somehow different, and the kids feel it.  Davide, my ten-year-old, avoids my eyes, scared of finding something painful there.  He retreats to his room and closes the door, shutting me out.  Serena is only seven – she hugs me tight, pats me, touches my face as if she needs to reclaim my body.  Then, resolutely, she takes my hand and pulls me off to go play with her, before I decide to leave again.

to receive the rest of the book at no charge